I live in a new neighborhood with all new surroundings and over the last six months i’ve been here i’ve spent a lot of time wandering around and tasting everything. (Everything that counts as food to be clear. I’ve not reached that point in my life yet where you start biting street signs. That’s a thing that happens, right?)

So let’s talk breakfast. Here’s what I don’t like. The clunky, ponderous old breakfast diners that boast seating for 200, lines out the door and foot tall finger smudged, plastic coated menus laid out against a bland neutral background. Basically 90% of all breakfast restaurants. They lack a soul. There’s a recipe that’s followed at these kind of places and they all share it. Wood panels, a few plants, servers in aprons and polos, slap on name that in someway combines a breakfast food item and a reference to morning and bam… you have a forgettable breakfast restaurant.

But Le Cafe surprised. It was different. Dare I use the word “hip”? I dare! It was hip. They are few months old now, having just opened up in Lincoln Square in October ish.

First, the menu is simple. There are about a dozen breakfast choices, half a dozen sandwiches, a few daily soup choices and it’s all laid out neatly on a black chalkboard that’s over the counter where it’s easily seen no matter where you are in the cafe. Great!

I went there twice this week and the staff treated me wonderfully both times. The first time there was an employee on their second day. He was honest in letting me know that he hadn’t tried much on the menu when I asked for suggestions but he directed me to a few things he knew were popular. The second time I was taken care of with the same level of courtesy by what I’m pretty sure is the manager or owner.

Le Cafe uses the Counter Service approach for their restaurant. All that means is that you order at the counter, you’re given a table number and than a runner will bring the food to you. It’s the opposite to more traditional Table Service where you have a dedicated server. I like counter service a lot for anything that isn’t meant to be a lavish dinner out. I’ve been to just about every casual dining chain I can think of that operates using Table Service and you know how many times the server has asked if there is anything else I need after I’ve been brought my food and actually answered yes? None, zero. Not ever. The only exception is maybe napkins and that’s only because they’re not laid out at a station for me.

I know how to order everything I want all at once. I’m a big boy now! Servers at anything but a multicourse meal is just a distraction. No one distracts me at Le Cafe. I was asked one time how everything was and that was it. That’s perfect! Let the diners eat.

The layout is really perfect too. The restaurant is situated right under the Western Brownline stop along Lincoln Ave. Sunlight reaches the street level without pouring in and blinding anyone. The counter runs right next to almost every table so if you do need something taking about two steps gets where you need to be. And the music, I love it. Bones Domingo queued up on their sound system! Everything else that I heard while I was there is exactly what I’d played if Le Cafe was mine. It gave me hope that Glidescope, Glitch Mob, I monster, Thievery Corporation, Little People and Codeine Velvet Club might come up next in the rotation. Point is, great ambiance music rather than just being left with the deafening cacophony of other diners’ conversations or being subjected to a Starbucks like easy listening. Character, the place had character. It felt like something that I could describe with more feeling than just saying “it was an ok breakfast place”

The food. I like my breakfast simple. I’m not looking for a filly fruit covered something displayed on the plate like a first year culinary student’s wet dream. Breakfast is eggs, a potato, a juice and some toast. Salt, pepper, maybe tarragon. 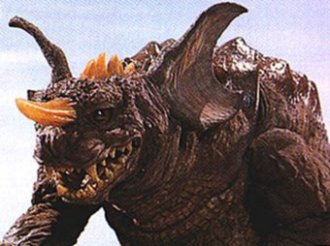 (not a Godzilla villain but a spice that pairs well with eggs. You’re thinking Baragon. Easy mistake to make)

I Like breakfast sandwiches. I get everything I want, which is a nuclear fuck ton of savory, all nestled between an English Muffin. I got that both times I visited and not because I’m boring. (er, maybe I am but this was a strategic choice and for good reason. Am I a Stannis or a Renley, you decide.) What I was looking for was consistency. Restaurants have on and off days just like us. I didn’t want to end up heaping praise unjustly. And both times I was treated to a perfectly cooked egg and beautifully seasoned breakfast potatoes. Grabbed one of their orange juices the second time as well. And you know what, best fresh squeezed orange juice I had in long time. 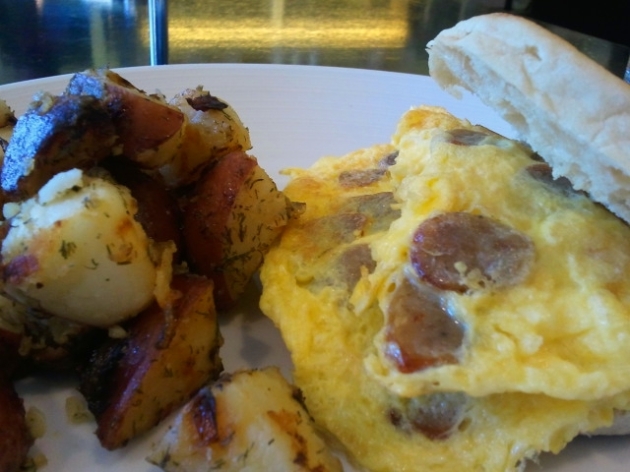 Does Le Cafe have any failings? Not really. I guess I could say that their prices are all about a dollar higher than for similar items found in other breakfast restaurants but that may be more of a product of their location than anything else. Lincoln Square is a bit more of an affluent area and generally speaking that means things tend to have a slightly inflated price. So expect to see nine and ten dollar waffles and omelets.

Also, not really a complaint but just an observation; Le Cafe has the most monstrously heavy tableware I’ve ever handled in my eleven years of food service. The stuff is seriously weighty. Didn’t ruin or improve anything but it was something that I noticed.

So regarding Le Cafe, I can’t suggest it hard enough. The food is exactly what I want it to be. Fresh and thoughtfully simple. The service is kind while managing to not be a distraction and the atmosphere is blissfully serendipitous (use of the word Serendipitous: +200XP). So if you live near Lincoln Square or happen to be in the area stop in and enjoy the place. I know I did.