The Approach to Retail Clothing Stores

We talked before about how to get the most out of the big three department stores and what they can do for your wardrobe and what to avoid from them. Macy’s, JC Penny’s and Kohls all had their specialties but they also had things to avoid.

Same applies with the clothing retailers. Unlike with the department store market, which has very few names in the game, the retailers are numerous and there’s no way I can cover them all in one article. So consider this the first of hopefully many.

So lets kick this pig!

It’s a Swedish company and the second largest clothing retailer on planet Earth. Bet you didn’t know that? I didn’t either till I did a bit of research.

Little basic history, started as a woman’s clothing store in the late sixties called Hennes (Hers) and some time after that they acquire a men’s hunting apparel store called Mauritz. H&M is born.

Full disclosure here, I really don’t like this store. Do I own a few of their things, yes. Do I even like a few of those things I own, absolutely. But it’s really hard for me to find anything at all appealing on a regular basis here.

They slant toward a very Boho-chic style which is fine. Who doesn’t enjoy a few loose fitting earth tones once an awhile? And for the ladies, what’s wrong with dressing up like the hot bait chicks from Hostel? The style is not my problem with this retailer.

My issue with H&M is that much of their clothing is rushed. Anything that’s trending at the moment will show up on an H&M rack extremely fast and in doing so they cut corners, choose cheap material, and then try and pass it off to me the consumer with a super low price.

An example would be something like chinos. Thanks to online retailers like Bonobos and designers like Dockers these types of pants are becoming very popular, especially the colored options. And about two months ago I started seeing H&M filling their racks with identically colored pants. I see the prices they had them set at and for a brief hopeful moment I was genuinely excited. Then I touched them. And my heart died a little bit.

Incredibly thin material. Loose strings. Not good at all.

In fact, you have to work hard to find anything in there that’s worth purchasing. The entire store is a doppelganger pretending to be on par with everyone else.

(This link sort of explains what a doppelganger is, but completely devoid of accuracy.)

That being said, there are some things that aren’t awful. I bought a white pea coat from them once that was Tasso Elba like. Also, their jeans are cheap enough and well made enough to be worth it for a pair or two. Aim for the dark shades.

Also, their stores are filled with these hidden under every shelf.

See that logo up there? I just want to say that Abercrombie and Fitch has NOT in fact been operating since 1892. That’s a really clever distortion of the truth. The original A&F sold guns for bringing down elephants and safari hats. They went bankrupt. The name was revived later by the Limited and A&F spun off on its own.

People hate on this store a lot for a lot of different reasons.

The marketing is a point of contention for some but I don’t mind good looking models trying to sell me things. The sexualized marketing to kids… eh? I mean, it’s not like A&F is the only one that does this. If you indite A&F you pretty much have to condemn the entire mall your walking through. Good luck buying loin clothes and animal furs while hoping the industry’s marketing standard changes.

Some people hate the prices. But I’ve never bought an item from them at full price. Things are always on sale. Always. There’s never a reason to buy from here without a discount. Everything drops in price and it does so fairly quickly.

One thing you can’t take away from them is the quality. It may be costly but the product is good. Even their simple flannels, their trademark items, really perfect. They’re warm, they don’t have loose threads and the material is excellent.

The major weakness of the store is its limited style though. Your options here are few when you really take a look at the whole store. Flannels, jeans and sweaters. Its not a bad place to come for those three things but this is all they have to offer. Although their colognes aren’t too bad either, specifically Fierce.

They have a few other brands too like Hollister but honestly, Hollister is made irrelevant by it’s own parent. The clothes are better at A&F and the prices aren’t too different. It claims to have a more So-Cal look but honestly all I see are variances in the typical A&F style. Hollister could go the way of Ruehl No.925, another A&F brand that closed up in 2010.

This is another example of a store that has become something completly different from what it started as. Banana Republic opened as a tropical themed clothing store in the late 70’s but thanks to GAP making a savvy purchase you have the store we know of today.

Banana Republic fills the niche of high end luxury retailer. It really does set the bar for quality but it also breaks the wallet too. If you think an A&F flannel is pricey then avoid Banana. That being said, you will not be disappointed by the quality. This is where I come when I have a few extra bucks to spend on one or two particular items and I’ve already searched other retailers for a similar affordable option.

The style is a little more dressy. This isn’t for the 18-22 crowd. Here you’ll find classic choices, great colors and good material. It’s also a good place to drop in for a new date outfit. Yes, it will cost you but you can’t go wrong with their options. Also, look for in store sales. They have them frequently just like A&F but unlike A&F you are probably going to have to pay full price more often than not.

I bought a really excellent messenger bag from them recently. I also picked up a Henley on sale (because otherwise i’d of just bought one at target).

I find their staff to be the most knowledge about style questions and about their own product. They’re older and more professional then the staff hired by the other stores we talked about. What can I say, I like Banana Republic.

Few things I see recently that impressed me. 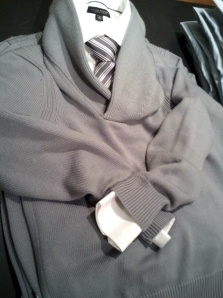 (On target. What else can be said. Shawl collar, stellar material and a good go between for dressy and casual.)

But that’s my approach to Retail Clothing Stores, what’s yours?

2 thoughts on “The Approach to Retail Clothing Stores”