Tasso’s isn’t the new kid on the block as far as Naperville restaurants go. It’s been on the scene for about three years now and the feedback I’ve heard is very across the board so when a friend first suggested it some months ago I was wary. Yelp had many reviews that were not at all kind but just as many were five stars too. Seemed very inconsistent. It came up as an option again recently so I took him up on it.

Tasso’s is located in downtown Naperville along Washington Street. For those that don’t know Naperville this is one of about three streets where you need to be if you’re intention is to be a successful restaurant. The outside face of the restaurant is basic. It’s not particularly attractive or unattractive. It’s basic like most of the street side restaurants down there.

Inside things change from basic to very open with tall ceilings, well laid out and with a classic appeal that I found very inviting. This is not a fast food Gyro Restaurant and that message is very clearly conveyed as soon as you step in. It spares the diner of the illusion of sitting among the ruins of the Acropolis too. Many of the Greek themed restaurants insist upon throwing up fake columns and statues throughout their dining areas but to me, this never looks good. It looks like what it is, theme décor. Tasso’s skips that cheap tricks and instead relies on its food rather than plaster columns to convince you that you’re at a Greek Restaurant.

Going into this experience, combined with sketchy past reviews and the fact that I was going to be dining at 7:30pm on a Saturday night, I wasn’t expecting much as far as service goes. But I was surprised there too. The seating was very quick despite the restaurant seeming very busy. Our waiter touched the table almost immediately, explained the specials and took our appetizer order for Hummus. 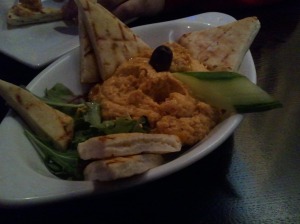 The Hummus arrived quickly, nicely plated as well. As far as the Hummus is concerned, it was fresh but the taste was a little delicate to me but certainly not a letdown. We needed another pita brought out for us because we had a lot of Hummus left over after the initial offering was eaten up. The waiter had no problem getting that to us quickly as well.

Then we ordered the entrees. In most scenarios for a first time visit to a restaurant I always ask the waiter for the house specialty or for his/her favorite dish. But when it comes to Greek food, which I’ve been eating for years, I find the best way to measure the quality of their offerings is to order one of the classic comfort food dishes. For me, that’s usually Moussaka or Pastitsio. I went Pastitsio this time. My friend got Dolmades.

(I saw the face of God when i ate those potatoes.)

We shared some of each other’s dishes.

The Dolmades are very excellent and the ground lamb inside is perfectly done. There isn’t a hint of overcooking and they may actually be cooked and rolled to order. To me, the only thing it was missing was some kind of sauce like maybe a creamy lemon Béchamel or something along those lines. It’s not a fault on their part, more of a matter of taste. It did come with Greek yogurt but that wouldn’t be what I was looking for on that dish.

The Pastitsio was better than average. It’s still not the best I’ve ever had, which is Kosta’s also in Naperville, but it was well done. The Béchamel was good, the meat was cooked fine and the cheese on top was lightly browned. It definitely gave me confidence that they could do other dishes successfully too.

The highlight for both of us during the main course though was the side dish. I rarely say this but the side was the best part of this meal. Their Greek Potatoes are second to none. They are so soft and the flavor is so spot on. Simple, lemon, pepper, oregano and that’s it. If they’re being held hot I’d be shocked. There are so tender and moist that I’m guessing they’re cooked very regularly throughout dinner service and served almost immediately or they too are cooked to order. These really stood out.

The waiter asked about dessert and I was curious about the offerings. They bring out a dessert tray showing their options off proudly rather than just with a written menu. I asked the waiter what was made in house and he suggested the Baklava or the Rice Pudding. I went with Rice Pudding and we both agreed, another on point menu choice right here. I was won over by the rice. It was soft without being almost raw but sturdy enough to add the texture that rice pudding needs.

Overall this was a good experience. It defied the bad vibe I was hearing from a few people and from Yelp. It was a classy setting that all came together nicely. The staff was fine, nothing special but not lacking either. And the food as well as the quick service time exceeded my expectations. This is definitely a place I’d come back to. It fits the bill for a good date night environment or upscale meeting place, impressive without being bank breaking and it has amazing potatoes. I’d recommend Tasso’s to all my readers and my friends. Ignore the mixed reviews on Yelp. Try it yourself. I did and don’t regret it at all.