Branmor’s, its moniker a combination of the of the names of the owner’s children Brian and Morgan, is something of an enigma to me. There’s no way it should be as good as it is. It’s tucked away, far from any heavy traffic. It’s located in a town that is devoid of any upscale fare. And it’s been around for fifteen years and still maintains the the same level of class, cleanliness and quality that it had when it opened.

I visited the restaurant on a Saturday early in the afternoon with a friend of mine. They’re only open for dinner service on the weekends, which is a smart decision on their part. Considering the area they’re located in I’m surprised there is business during weekday lunch to sustain them.

First thing you notice when approaching Branmor’s is that it’s very isolated from the rest of Bolingbrook. It’s far enough outside the more trafficked areas to feel sort of cozy in a way. The restaurant’s nearest neighbor is a small shopping strip across the street and other than that you’ll be driving past open prairie land and a few residential areas.

Now i’ve dined here once about ten years ago and what struck me upon entering is that it’s exactly the same then as it is now. As an eighteen year old kid I immediately knew I was in for a classy experience and even now walking in through their double doors and into the high ceiling foyer area I felt exactly the same.

Visually the restaurant has a very “big” feel to it. The ceilings are high, the seating is nicely spaced and the various different dining rooms and open patio enhance the size of the place. By restaurant standards it’s large too. It’s a 240 seat restaurant. That’s big for modern restaurants opening today.

And as far as restaurant appearances go Branmor’s doesn’t feel dated despite it’s age. (Fifteen years is very old by restaurant standards. They show their age very quickly.) It’s not like walking into certain older restaurants and getting that Elk Lodge esq feel of the super streamlined soulless feel of a late 80’s early 90’s born steak house. The concept is timeless; great architecture and clean open setting.

We’re asked about which dining room we may want to sit in and then seated right away in the main room. I let them pick the dining room and they gave us the one that showcases the restaurant’s greatest asset; the architecture and the ceilings. The room is lit purely by the light coming in from the windows and because of the design it’s plenty bright. Natural lighting is the way to go if your restaurant can hold up to the scrutiny. Branmor’s does.

Now the food. I asked for the waitresses suggestion and she was very happy to give assistance on the house’s specialties and strong points. I went with a Top Sirloin cooked rare with a Gorganzola and spinache topping served with garlic mashed potatoes. My friend went with a half slab of ribs. His accompaniment was a salad. I chose the steak soup the waitress suggested. 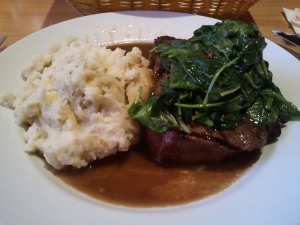 The ribs, to the restaurant’s credit, were exceptional. They are a perfect example of what a Midwestern style rib should be; tenderly cooked and wet with barbecue sauce and some light caramelization of the sauce along the rib bone. The sauce I’m told is made in house and the taste is right on point. It’s tangy but it’s not spicy. The perfect balance.

My soup, very well done i thought. Lots of flavor, good quality meat and the right size for the portion.

My steak. The only criticism I have for Branmor’s is that it’s presentation is starting to show it’s age. Plating is a big thing now and the trend is toward thoughtful presentations. The presentation on the steak and potato was a bit simple and the demi glaze was just left to pool on the plate. It’s not bad, it’s just incredibly basic and dated. As far as the taste is concerned I have nothing bad to say. For a rare top sirloin it was exactly what I wanted it to be. Tender, full of taste, great marbling  and with a little crispness to the fat. Great cut and very nicely prepared. The garlic mash was fine too. Far better than other restaurants would have done. It tasted freshly prepared and not like a product held hot for any amount of time. That being said, it wasn’t a particularly exciting side either. It was a safe choice.

My final assessment would be this. Branmor’s is something of a fluke, a rarity in this  modern restaurant era. It exists in a market where you’d of expected it to have died long ago. It’s not a place to go if you’re looking for the chefs to take risks. You won’t look at their menu and see something completely new and bold. Branmor’s is full of safe choices. I don’t mean boring, it’s certainly not that. It’s classic and sometimes classic is what you’re looking for. Branmor’s American Grill fills that niche very well and I recommend it highly.