I’ve been inside Blackfinn many times. It’s the flavor of the month as far as most popular weekend night spot in Downtown Naperville. And I’ve visited it many times in that capacity.

On a Saturday night this bar is packed from front to back. It’s also the only bar in Downtown Naperville that has bouncers outside that actually turn people away. Yep, it’s that pretentious.  But you know what; it delivers on the experience that its clientele are looking for. It’s as clubby as you can get without going to Downtown Chicago. The patrons on a Saturday are about the same too, clubby, cocky and elitist.

But at the same time they have a great bar staff and actually have a great bar set-up. The place is crisp. The atmosphere is consistent and classy with dark wood countertops, nice behind the bar lighting that highlights their top shelf liquors and it has multiple bars. Each one looks good and it prevents long waits for drinks.

But I don’t want to talk too much about the bar aspect of Blackfinn. I and a friend visited them on a Sunday around noon to try their rather serious looking menu. See, when Blackfin’s isn’t catering to the club seekers on the weekend they are open for regular lunch and dinner service. 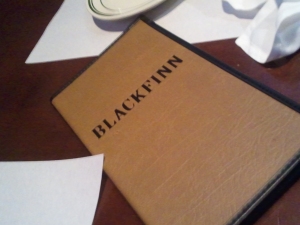 The first thing we notice is their dining area. It’s located upstairs above the pub area. Very impressive. Clean setting with tables and booths that match the dark wood aesthetic seen in the rest of the establishment. The walls have some decorative photo frames on them of old time rustic settings suggestive of the “saloon” theme but all done neatly. It get’s the theme across without having to have barn items and other junk on the walls.

It’s brighter up here as well with large windows that overlook the downtown area.

The only downside is the large screen televisions on the wall. I dislike that distraction. People come to bars and restaurants for atmosphere and for conversation, not to watch television. I know some places cater to a sports crowd but nothing about this restaurant suggests that it aims to be filled with the sports crowd. Especially since one of their criteria for entrance during a Friday or Saturday night is no sports paraphernalia on your outfit.

The staff was very kind as well. The hostesses greeted us immediately upon entry. They smiled, they looked good and they carried on a pleasant conversation why leading us upstairs to the dining area.

Our waitress, Kristy, greeted our table quickly. She made good suggestions for menu choices which I took her up on and she checked on our table frequently but not to the point of being a bother.

As far as the food is concerned I’ll start with the appetizer first. They had a special Oktoberfest menu with a few seasonal offerings. On the list was Potato Pancakes. We decided to give them a try. As far as being a Potato Pancake it was far too close to being a hash brown patty. Too much shredded potato and not enough pureed potato. That being said, the taste was there. I just wouldn’t call it a Potato Pancake.

Other than that the food was excellent. My friend has an Ahi Tuna sandwich and fries. It claimed to be sushi grade and he agrees. He eats sushi far more frequently than I do and at some reputable spots. I had what they were calling Queen City Chicken. It’s chicken and sausage wrapped in bacon. This is an excellent dish done on a bed of Sweet Mashed Potatoes and with some asparagus. The combination worked. The Sweet Mash and the spicy sausage paired really well. No complaints about this dish at all. 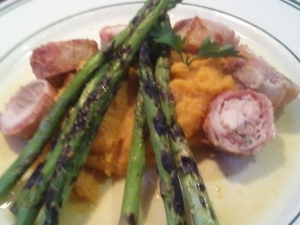 For prices, you pay for what you get and I mean that in a good way. The dishes average around fifteen dollars and from what I’ve sampled they’re worth it.

For those of you that are local I can’t suggest a lunch or dinner at Blackfinn more.

Blackfinn is located at 16W Jefferson Ave in Naperville 60540.